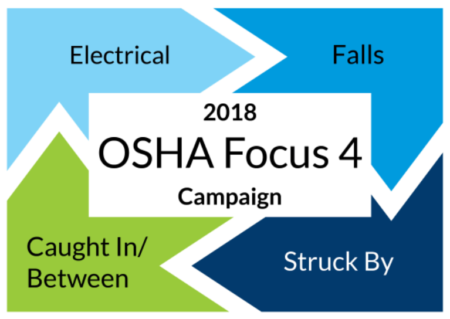 As part of CAWP’s Alliance with OSHA, we promote an annual “Focus Four Hazard” campaign to raise awareness on focus four hazards, which account for a majority of injuries and fatalities in the construction industry.

The below series of Focus Four ToolBox Talks can be used at any time during the year so that the topic corresponds to the type of work being performed on your jobsites.

The leading causes of worker deaths on construction sites were falls, followed by struck-by, electrocution, and caught-in/between. These “Fatal Four” hazards were responsible for well over half (64%) of the construction worker deaths in 2016*, according to BLS reports.

We encourage you to provide feedback which will assist us in promoting future safety efforts and evaluating our impact in the construction industry. All voluntary feedback may be sent to OSHA’s Pittsburgh Area Office, in care of Bob Carroll, Compliance Assistance Specialist at carroll.bob@dol.gov.